Thought I'd post a couple of (poor) shots of the Roman cavalry unit I'm currently working on.

Figures by the ever talented Adam of Aventine.

Still a lot of detail work to do. I've painted these" up" from a black undercoat, using the shade, medium and highlight technique I used on my Republican Romans. The pike posted earlier were blocked, dipped and highlighted and I think this is a method I'll use going forward (at least until I find something else new....) but I wanted these guys to match the rest of the Romans already completed.

I still need to highlight flesh, leather, metals and purple.

Off on holiday to Thrace Bulgaria later to day, so that's all from me for the next 10 days or so! 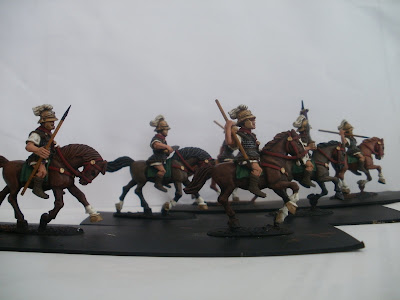 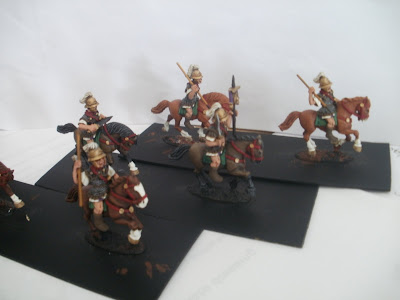 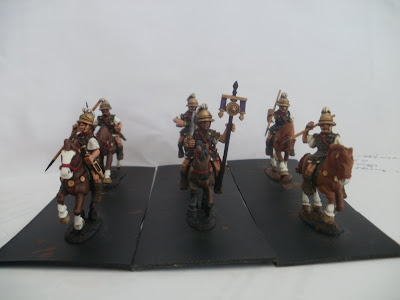 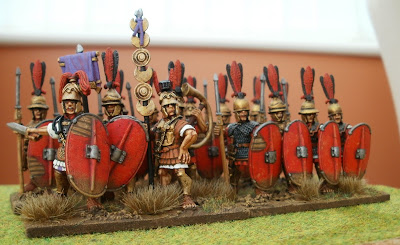 This unit was originally destined to take part in the SOA Games Day Zama and subsequent Salute demo game in April 2010 and was started before then. It was finally finished in May this year - hence the title.

Figures are from the ever incredible Aventine range.

As a result of their protracted arrival time, I decided they had done long service and their look hopefully reflects this. I've tried to make the shields look bruised and battered; so much so that they've lost some of their leather coverings so you can see the plywood core. I theorised that such loose bits would get hacked off so they don't give the enemy anything to get hold of.

Shields are also pretty grubby at the base, as their shape and character lends them to be resting on the ground for good periods of time. When carried on the march, they would also be very susceptible to picking up mud and dust generated by marching feet.

Next up is a unit of 12 Roman cavalry to add to the 224 infantry so far painted for this army
Posted by Craig at 20:45 9 comments:

I've been thinking about doing this for a while (publishing a blog) and never got around to it. Here's a couple of pics of some Aventine Pikemen I've been painting over the last month or so to get things started.... 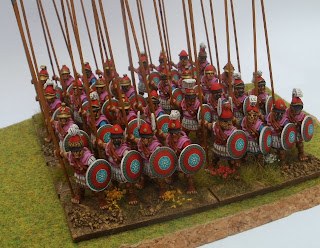 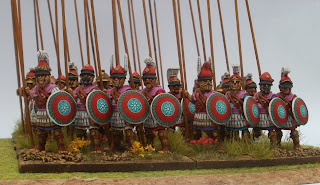 As you can see, the design and production of the figures is absolutely fantastic and makes painting them both a pleasure and a relatively easy task. Kudos to Keith and Adam of Aventine for their skill and passion in bringing such a fantastic range to the market.﻿
Posted by Craig at 13:16 2 comments: