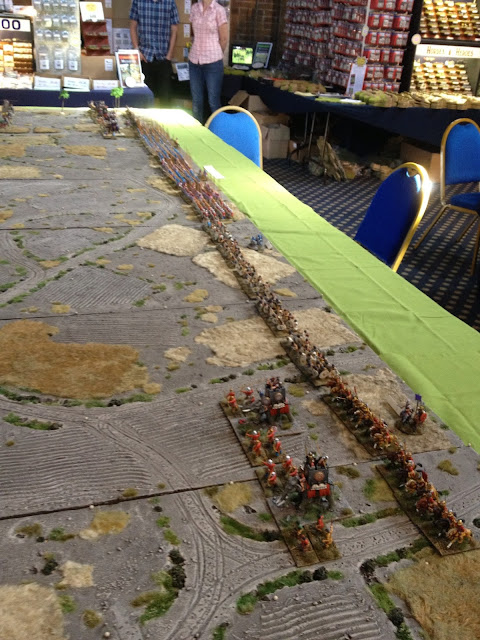 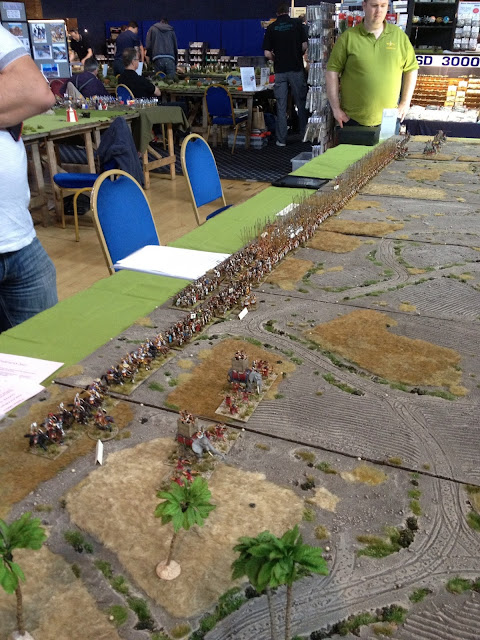 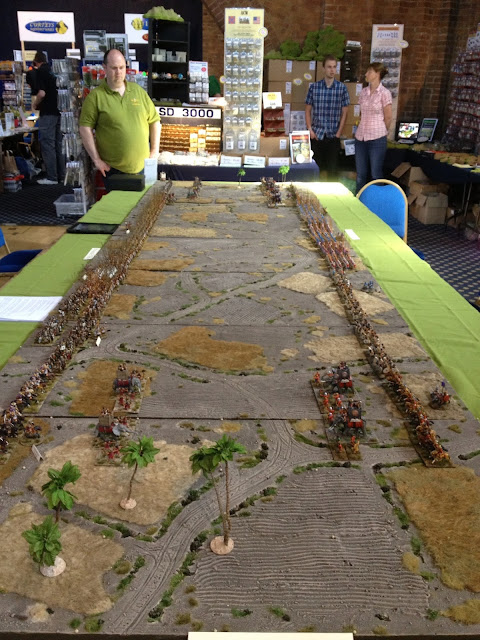 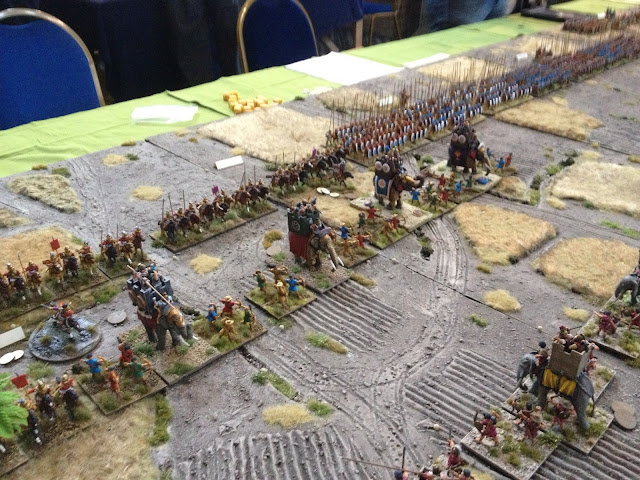 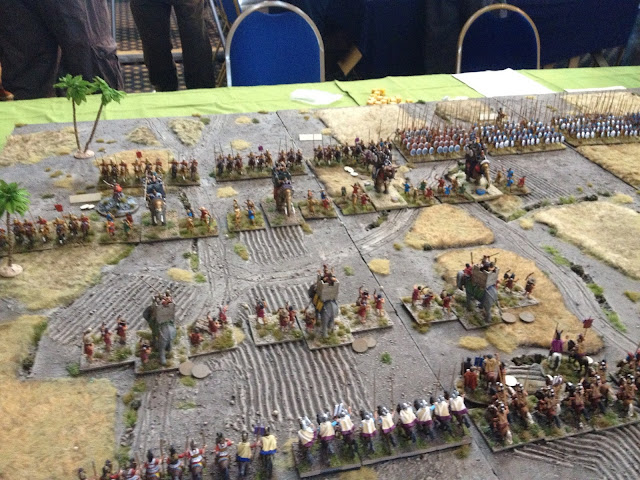 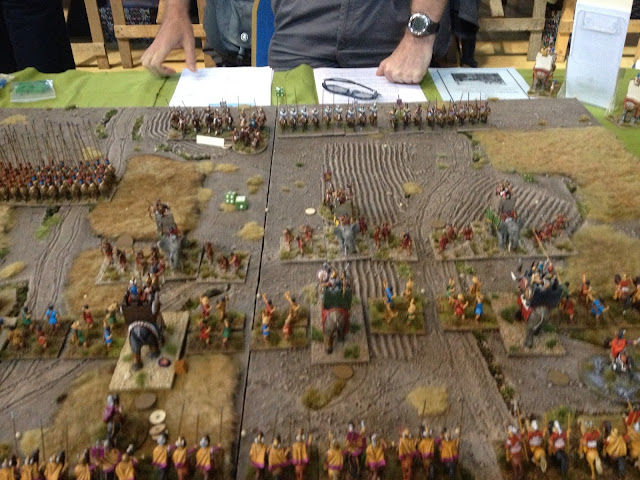 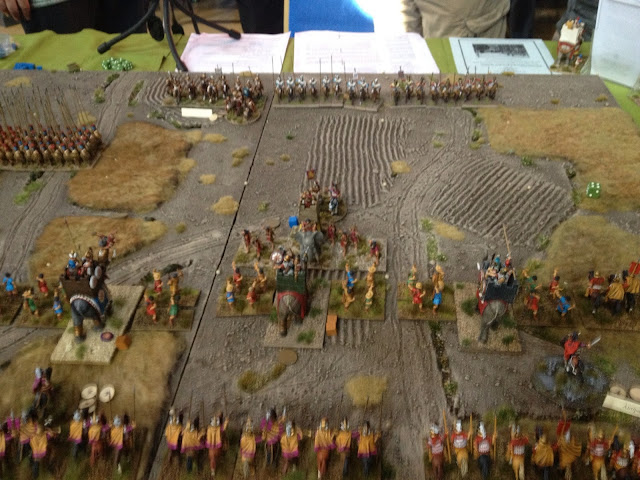 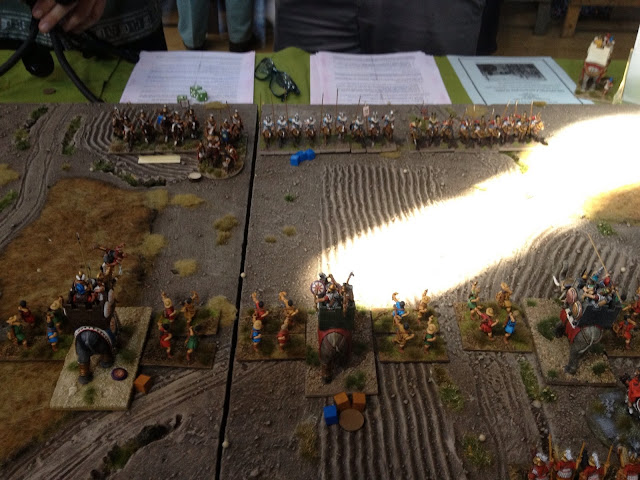 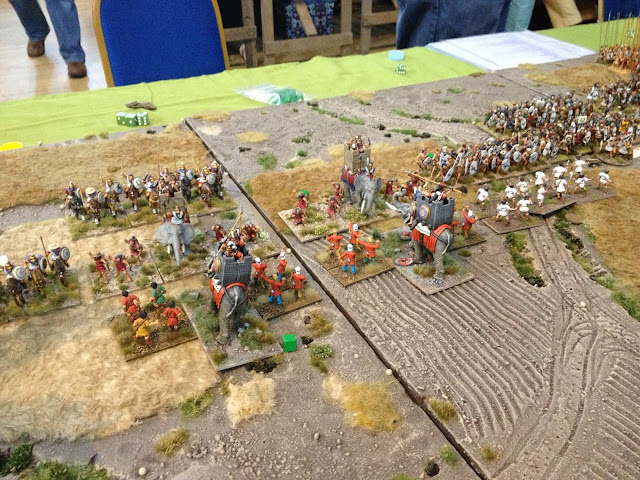 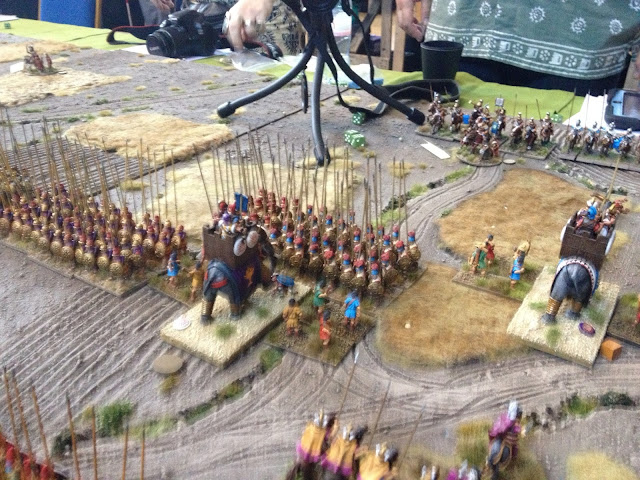 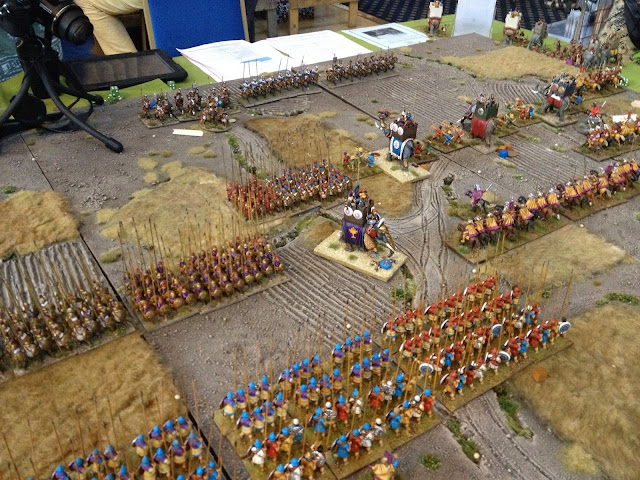 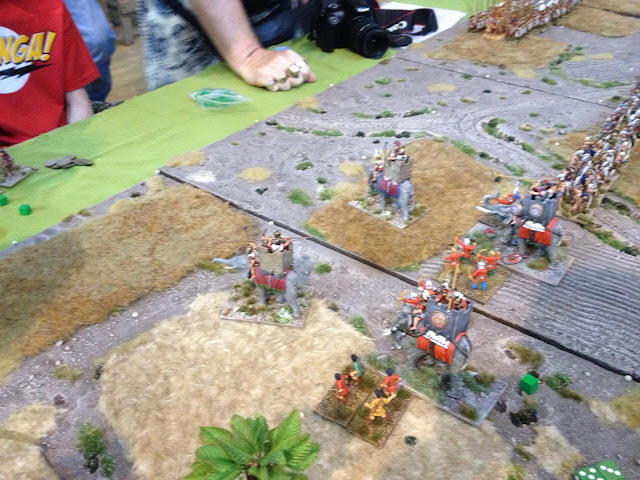 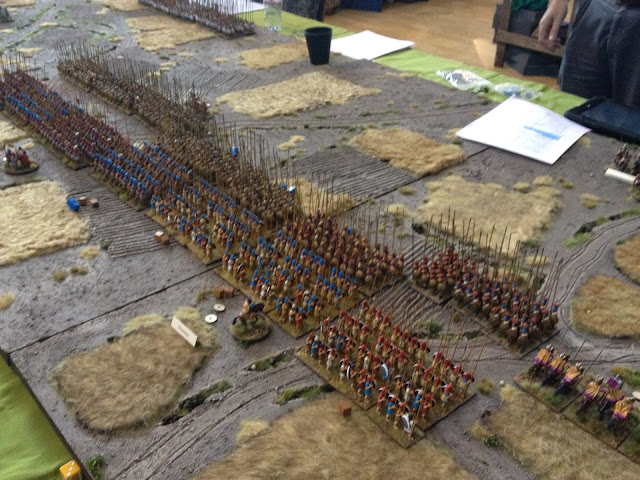 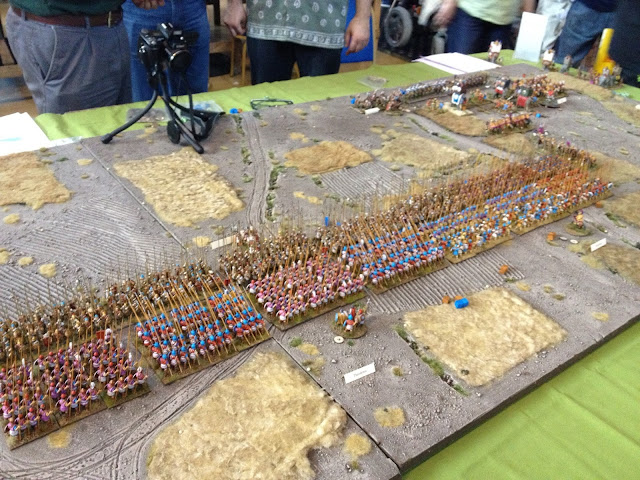 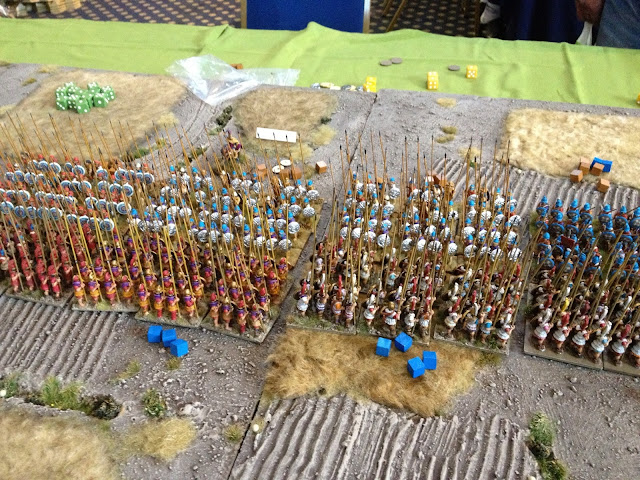 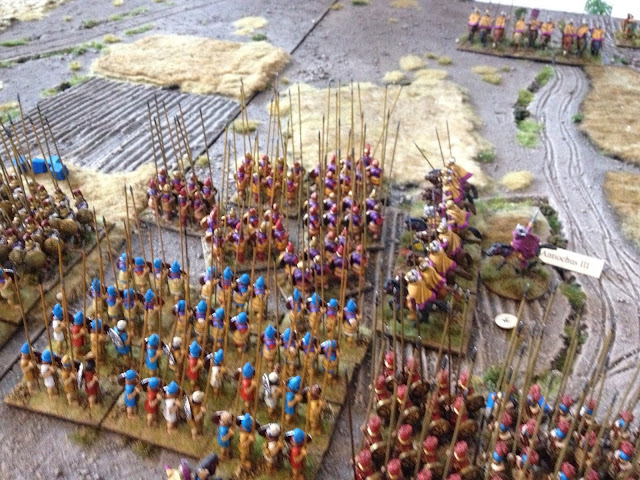 The Agema beat the Greeks and advance in pursuit, revealing the flank of the next unit in line, who are charged frontally by the Argyraspides and in the flank by the Seleucid guard cavalry accompanied by Antiochus, with predictable results... A couple of other units also go down, leading to the demoralisation of the whole Ptolemaic army and a history changing Seleucid victory.
All the above pictures were taken with a iPhone; lots of other pics were taken with much more professional kit, so I'm sure better pics will be forthcoming...
Rules were Simon's "To The Strongest!", named after Alexander's supposed answer on his deathbed when asked who would inherit his throne. They're still in development, but gave a good account of themselves in what was a large, complex game.
Posted by Craig at 19:20 21 comments: 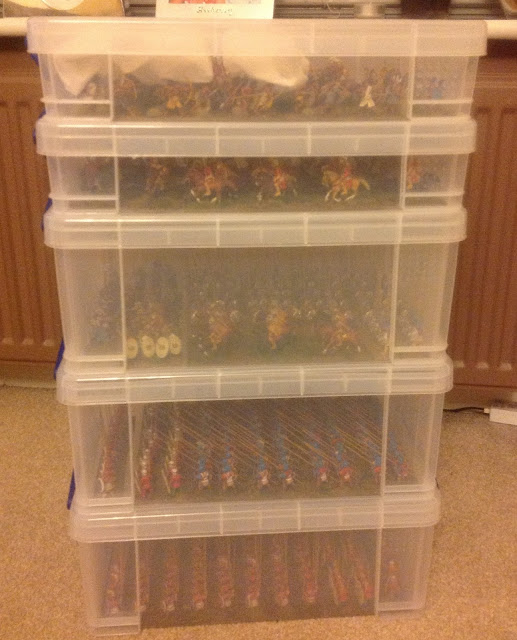 Email ThisBlogThis!Share to TwitterShare to FacebookShare to Pinterest
Labels: Raphia

A bit more WIP. Deadline fast approaching ...
These are more Aventine. All painting now done, just need to complete basing for a half a dozen units. Could be a late night...

Line cavalry virtually completed, just need to finish off the bases (there's another four bases to go with these, so four units of nine in total). All Aventine, with a high proportion of head swaps. 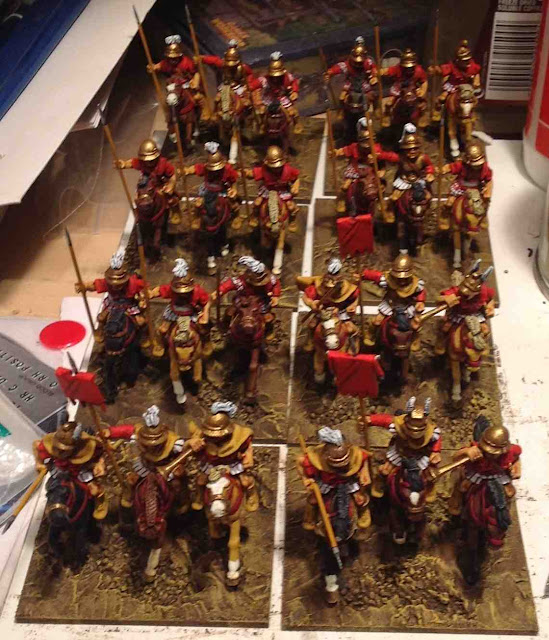 Last of the Arabs assembled and stuck on bases, just the ground work to do. They'll then be added to the other five bases to represent the 10,000 required. Perry Ansar figures, a couple of Victrix and Warlord heads, Aventine shields.

Finally for today, a unit of Asiatic archers, about 40% done. Crusader figures 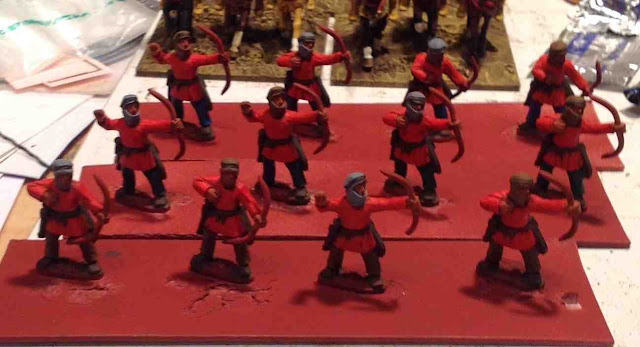 This is the last of the heavy cavalry for Raphia. They're about 80% done; mainly the flesh areas and some detailing to complete. Their horses have been sat around waiting for them for some time...
In case you're wondering, about two thirds of these have head swaps.
The Seleucid force for our Raphia game will comprise six units; two guard units and four line. That's fifty four total. Should look pretty good! 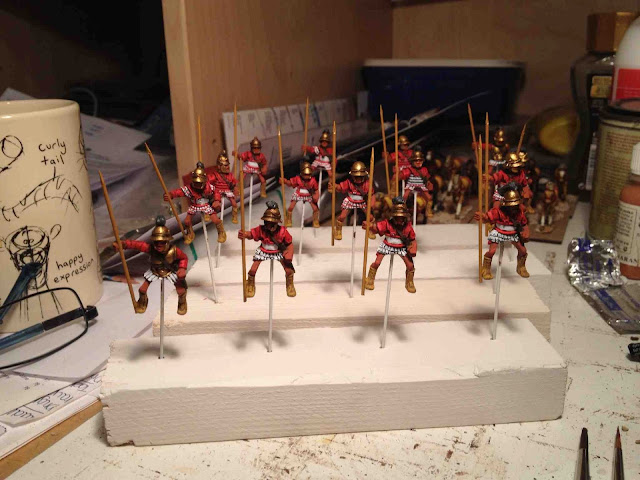 Apologies to regular readers - this post has NOTHING to do with painting, figures, wargaming, history, etc., but is a shameless money raising plug, albeit for a good cause!
On June 8th, I will be taking the plunge (literally!) when I start my first triathlon. The are are some eighty-odd of us taking part from the business I work for. Me and two colleagues are jointly fundraising for the Anthony Nolan Bone Marrow Trust, an organisation that helps to match bone marrow donors to leukaemia sufferers, particularly children - a worthy cause if ever there was one!
Anyone wishing to contribute can do so here
http://uk.virginmoneygiving.com/fundraiser-web/fundraiser/showFundraiserPage.action?userUrl=Greenhamnorth&faId=326381&isTeam=true
If people don't contribute, I'll just have to post more pictures like the one below....I'm "swimming man" in case you want to know! 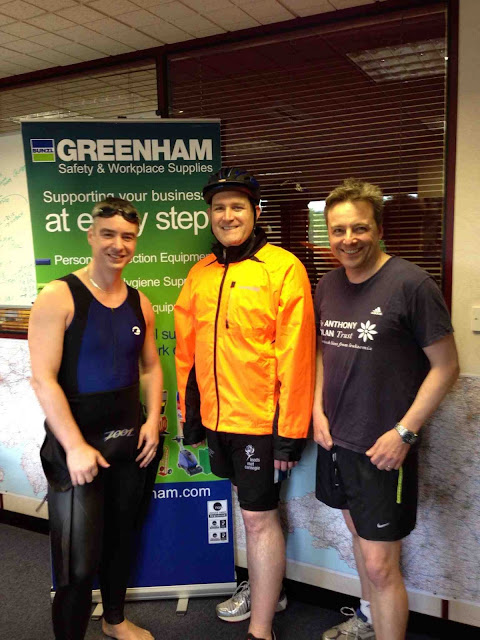