The Greek mercenary pike represent the 5,000 who fought for the Seleucids at Raphia, "armed in the Macedonian fashion".

Figures are by Foundry, originally painted about 18 months ago and parked. I've finished the basing and added some extra shields for the chaps that didn't get them first time around. Shields are from Crusader (I HATE Foundry bottle tops!), with home made transfers. The design is based on one of the frescos in the Aghios Athenasios tomb. I drew the image in MS Paint and used a sheet of transfer material bought from eBay. 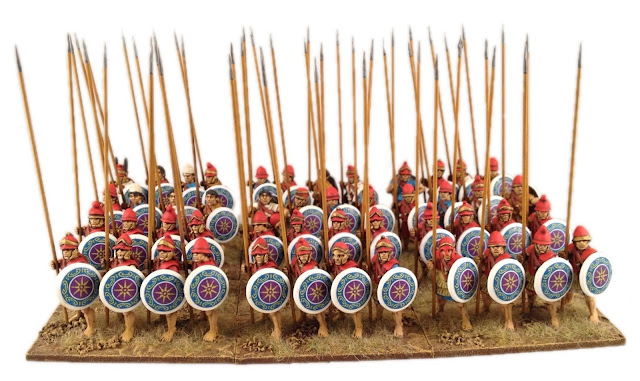 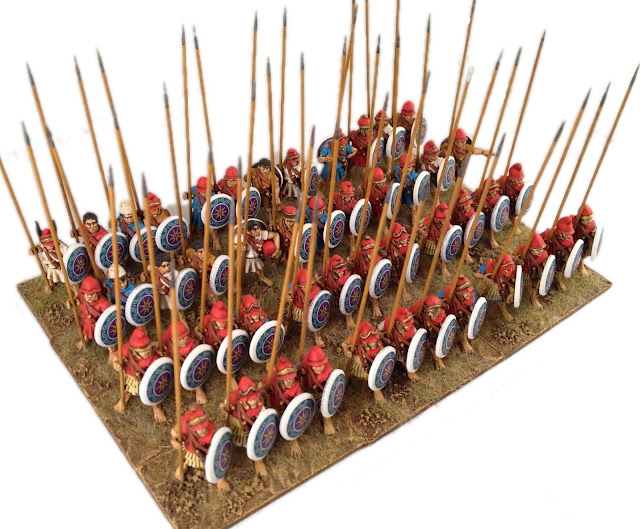 Secondly, we have the second unit of Asiatic troops to add to err... the first. Basically the same paint job, with a different coloured hat (yes, I know it's called a tiara!). Sometimes a simple paint job works a treat. 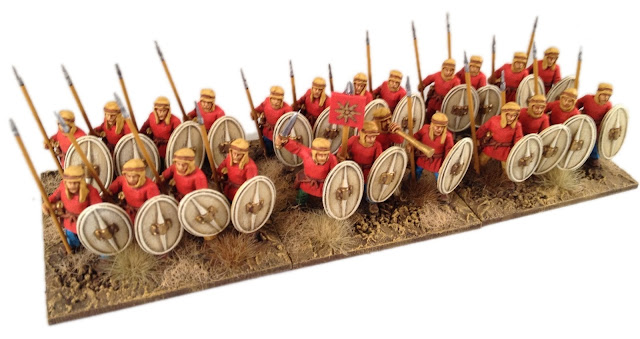 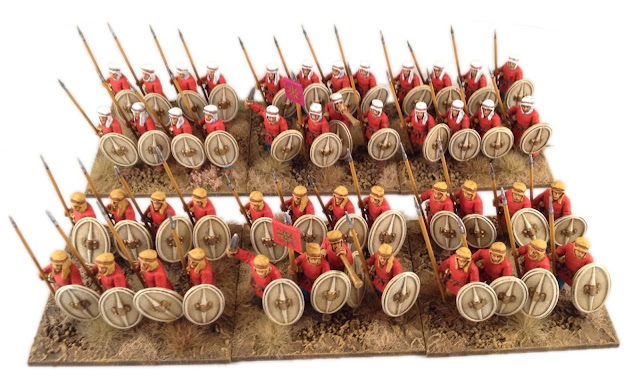 These are nearly complete - figures are painted and based, just waiting for their shields and groundwork to be done. I'll get a shot of both units over the weekend when I've had chance to finish everything off.

Another unit for Raphia (almost!) down.

The element to the left has just been finished today to bring the unit up to full strength.

The second photo is the new arrivals from my last post prepped and reddy (get it?). I've used red oxide primer on these as red I'd the predominant colour on these figures. I realised that the first thing I'd done with the other batches was to apply copious amounts of burnt cadmium as a shade for the final red, so thought I'd try and short cut this process.

I'll probably change the head dress colour on the second unit to a) differentiate and b) stave off boredom! Let's see how that works out. 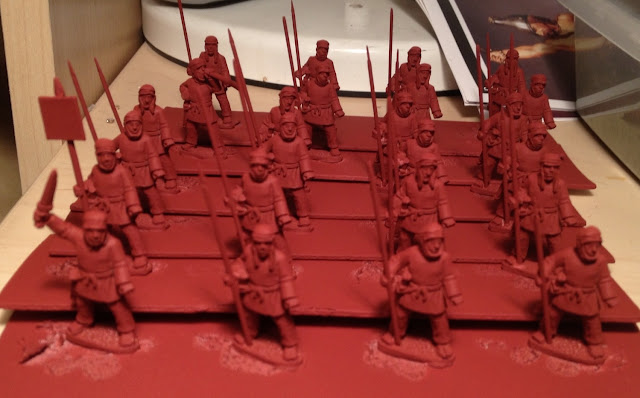 Another unit of Asiatics for the Raphia game arrived this morning. These were ordered on Christmas Day off the back of some money I was given on the day :-)

The figures are from Crusader Miniatures. Shields will be switched out make them more obviously Hellenistic as these here

I'm currently finishing off a small batch of eight figures to expand the initial unit to the full twenty four required for our scenario. Once completed, the two blocks of 24 figures will represent the 5,000 men present at the battle in 217BCE. 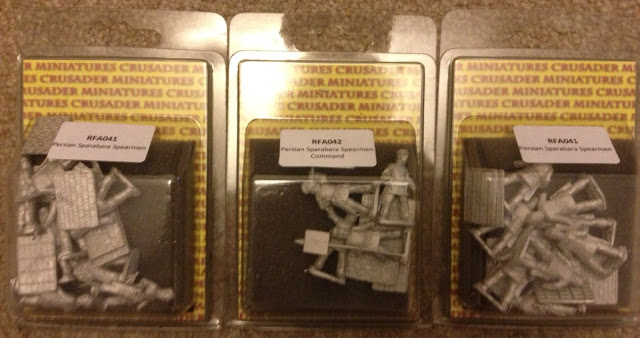 Getting on the Bandwagon - 2012 Review

Seems to be the done thing ;-)

I'm actually quite surprised at how much I have actually got done over the course of last year. One thing the blog is really useful for is to keep track of what I've completed. Here's the list, in reverse order:

Total 236 foot and 28 mounted, all Aventine, with the exception of the Foundry pike (obviously!), the Asiatics (Crusader) and the Arabs (Perry conversions).

Some of you may also remember that I made the terrain for our Heraclea game at Partizan earlier this year, which consisted of six 4'x2' boards, giving an 8'x6' playing area. We were also able to use at the other Partizan show to fight a first century Roman Civil War game, with last of additional "dressing" provided by Simon AKA BigRedBat.

Raphia is the game for this year, with still lots to paint. I'd like to thank everyone that looks in from time to time, particularly those who leave comments; your kind words really do help when the painting mojo occasionally goes AWOL! Hits have now exceeded 25,000 - can't tell you what that does for the ego ;-)