Just finished the next batch of 16 Pink Pike.

I decided that 8 figures across for a pike block doesn't really give me the impression I want, so decided to expand my Pink Pike unit to 64 figures in 4 ranks, effectively doubling the frontage. I also decided that I wanted to mix up the colours on the armour, having seen Adam's Blue Boys on the Aventine site http://www.aventineminiatures.co.uk/gallery/displayimage.php?album=34&pos=34

Adam has mixed up his two primary coulours of blue and white to give a varied but still very homogenous looking unit. Being the magpie that I am, I decided to pinch the idea!

My plan is to paint perhaps a quarter of this second batch the same as the original figures, so that when I mix up the bases they should all blend, without it being too obvious that half of the figures are more uniform than the rest. I'm also thinking of adding a bit of extra colour to one or two of the previously finished figures to help break up this impression.

Figures still need shields, varnish and basing, but this will wait for the other 16 figures, as these will have alternate tunic colours (probably red and off-white). 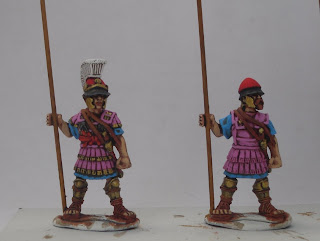 ﻿
﻿
In case you were wondering, there is a fourth base, but the photo was a bit poor so I discarded it.
Posted by Craig at 15:56 4 comments:

Thought I'd try and get some shots of my full Roman Army from Aventine, so set it up on the table on an old piece of grass matting I dug out of the garage.

I took the shot in the early evening, so it wasn't so bright to wash out the colours, but some of the reds still look a bit intense.

The army is made up of two Roman legions and two Allied legions. Each legion has two units each of Hastati and Princpes (16 figures in each), one unit of Triarii (8 figures) and four units of Velites (8 figures). Only half of the Velites are shown here. At the moment, I've done one unit of 12 Roman cavalry and one unit of 9 Allied cavalry. I've just bought another unit 12 Italian/Tarntine cavalry that will work to flesh out the army.

An eye level shot across the front of the army 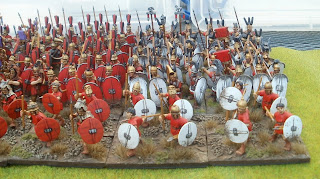 A shot across the front from the right flank

A shot of the right 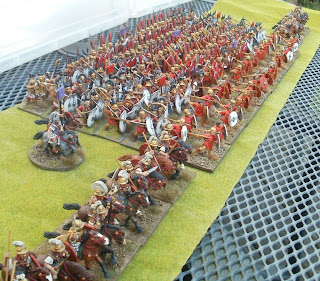 Across the front.  All pictures are clickable
I would have liked to have shown them in the classic quincunx formation, but the table wasn't big enough!﻿
Posted by Craig at 20:25 9 comments:

As always, a joy to paint. Shield designs hand painted.

These are the first shield designs I've done on this army, as I'm not convinced any were used this early. The shields looked like they needed something "extra", so I've gone with something fairly neutral and generic and I'm quite pleased with the results, particularly as they were relatively easy to do. 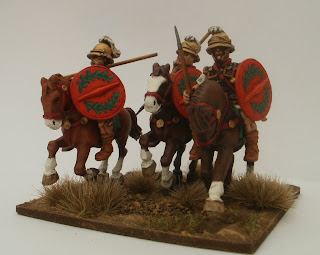 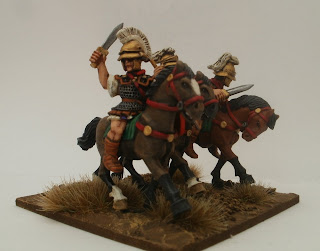 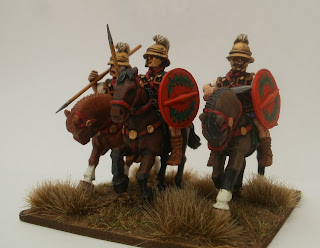 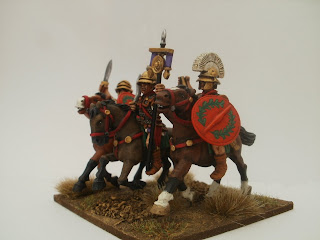 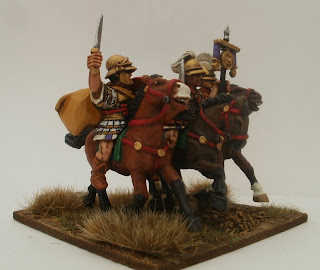 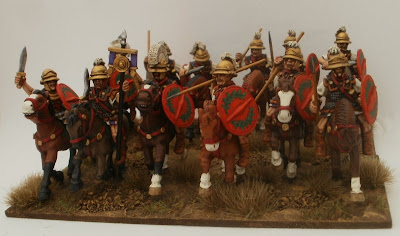 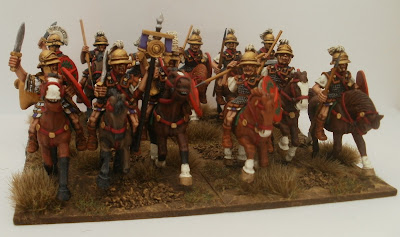 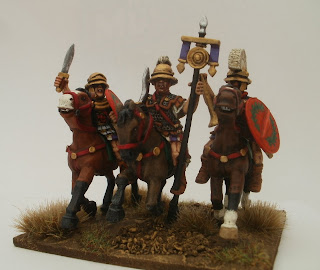 All pictures are clickable.
Posted by Craig at 17:32 6 comments: